Govinda is getting trolled on social media regarding these songs. Although Govinda fans are liking these songs a lot, but some people are not liking the songs of Govinda.

90s superhit actor Govinda (Govinda) recently shared many video songs from his YouTube channel one after the other with the fans. In those videos, Govinda was seen dancing as a lead and giving playback voice. Govinda has so far released three such songs on YouTube. about these songs Govinda is getting trolled on social media, Although Govinda fans are liking these songs a lot, but some people are not liking the songs of Govinda. On this, now Govinda’s nephew Krishna Abhishek (Krushna Abhishek) has also reacted. Govinda recently released ‘Mere Naal’ (Mere Naal) had released the song, as soon as the song was released, there was a flood of comments on the comment section of YouTube.

Govinda released his song on the special occasion of Lohri

Govinda released this song from his YouTube channel on the special occasion of Lohri and wrote in the caption – ‘Hi guys, today I am bringing my new track in front of you guys. my placenta Hope you all will be happy to listen this song and dance on Lohri. In such a situation, Govinda had disabled the comment section itself. Earlier, something similar happened when Govinda’s song Hello was released.

When Govinda was called as a special guest in comedian Kapil Sharma’s show The Kapil Sharma Show, Krishna had flatly refused to be a part of that show. Govinda did not like this attitude of this nephew Krishna at all. However, in that episode, Govinda arrived with his wife Sunita Ahuja. At the same time, Krishna was not a part of that episode of the show.

Varun New Film: Varun Dhawan got Rajkumar Hirani’s ‘Made in India’, know when will the shooting start? 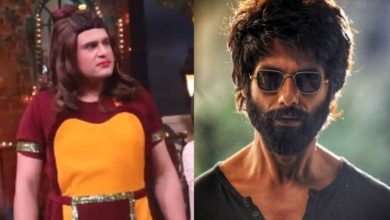 On the occasion of Janmashtami, Monalisa appeared in a traditional look, she is looking very beautiful in a sari